The name Texas comes from tejas (of the Native American language of the Caddo Nation) meaning “friends” or “allies.” And our week traveling through the country’s second largest state definitely demonstrated its state motto: friendship.

Here, we found friendship resonating in different ways: as displayed through taxidermy, comics, highway billboards, poetry, improvisation, and affordable housing. We met a number of artists, educators, and activists, we found solace in the Rothko Chapel, and we encountered dynamite rebuttals to the fake news media. It’s Texas, after all. Open carry is the law. Fortunately, everybody here can agree-gree on the best eats at Tacos A Go Go.

Taxidermy: the hunt and artistic creation resulting from the time-honored sporting bond of father and son. We had 4th of July lunch at the Back Door Cafe – a delicious menu and character-filled cafe at the back of a mercantile. The food was homemade, the service was friendly, and it was clear that all of the patrons were like family. As we walked out the general store in front, we saw this image on the register:

It was a good reminder that a great number of our voting public feel heard and vindicated by the new administration. These are our fellow citizens. We can break bread together and talk. We can share something small. We can hear each other better if we listen.

Sarah counted approximately 82 taxidermied animals in the mercantile and cafe, including a baboon, a bear, and a wild boar’s behind. So, there was a lot of listening going on in that joint!

Marfa, Texas is a few blocks of artist haven, plus a philosophy of art for art’s sake. But all of this theory and design was plopped into an economically depressed town in the 1970’s. Eyebrows were raised for more than the upturned challenge of conceptual art. Today, tourists, movie stars, and famous artists come from all over the world to experience Marfa’s novelty. Local residents live among the arterati, site-specific masterpieces, Border Patrol, and some neighborhoods that never recovered from the railroad’s technological developments. The Texas and New Orleans Railroad left Marfa and its workforce behind once trains ran faster and stops ran fewer. The influx of independent artists didn’t address the workforce. And though the town’s registers benefit from tourism today, do the residents?

We had the pleasure of meeting Library Director Mandy Roane, who offers fantastic children’s programming that bridges education and arts under the premise of building a better world. We partnered to offer a comic-making workshop where we met awesome young writers and artists who made work about the clash of opposing ideas, how tourists are changing Marfa, and an elephant lawyer fighting for indigenous land rights. You’ll see some of their comics in the 120 Project Comic Anthology!

The Power of the Pen

We passed a giant billboard on Interstate 10, just outside Boerne, TX that used the power of the pen to send its message. Private citizen Kyle Courtney’s reference to his breakup with ABC news is a reminder of how seriously Texans take friendship. Mr. Courtney feels betrayed. We were buoyed by his tenacity, and his commitment to publish his words as a way to share, declare, and inform.

He made the national outcry a personal one. This is how we get to know individuals, instead of relying on curated news feed and groupthink to make up our minds.

In Houston, we met performance poet, artistic archaeologist, and producer of experiences Emanuelee “Outspoken Bean” and the incredible members of his teenage performance poetry team Meta-Four Houston. Bean talked to us about his experiences around the country working with kids to create and perform poetry that speaks to current events, the zeitgeist, and the POC experience. We engaged in conversation uncomfortable, messy, and open about the problems with white liberals, the hypocrisy of the safety pin, the “orange floodlight” his current poetry students are taking on, and the genuine actions people can take to show brotherhood, sisterhood, and poetic socialhood through their words, their thoughts, and their movements.

His students are mighty verbal champions with resounding resonance, syntactical strategy, and dynamite diction. Next week, they will compete at the 20th Annual Brave New Voices International Youth Poetry Slam Festival in San Francisco, CA, and we’ll be following their success! Most of them didn’t know each other before joining Meta-Four Houston, and now they’re like family who regard Bean as a trusted mentor. That. Texas. Friendship.

In 1993, a group of 7 African-American artists and community activists set out to transform Houston’s northern Third Ward from a state of disrepair and ill repute to a community that cares and communes through art, affordable housing, and community engagement. They called it social sculpting. Today, “The mission of Project Row Houses is to be the catalyst for transforming community through the celebration of art and African-American history and culture.” –projectrowhouses.org

We visited Project Row Houses (PRH) where the lovely Tania Breton Santin gave us a tour of the artist studios, affordable housing units, artist-enhanced yards, education house, and the Emancipation Economic Development Council’s Ujima Residents Resource House, as she explained the concept and values of social sculpting. Then she introduced us to Jesse Lott – a prolific artist activist, and one of the PRH co-founders. Mr. Jesse, as he’s addressed around a table of Dominoes, is a fixture of the community – both in his engagement with the artists who work there, and through his own artwork in the neighborhood. Over two hours, we got to know him through the eyes of other community members around the table, and those who dropped by all afternoon – every one of them sharing inside jokes, personal histories, art supply tips, dropping off food, or delivering affectionate hugs. Before the evening was over, Emily had been invited into the game, and we were honored to hear the stories of how PRH started and why art changes the world. We were even treated to a tour of the Third Ward as Jesse pointed out community art projects, his go-to gumbo counter service, and his own yard and studio filled to the brim with metal and wood sculptures. Like dominos, his words of wisdom and his art affect all who come into contact with him.

Before leaving Houston Sunday morning, we met teaching artists Gayla Miller and Jane Weiner, founder of Hope Stone. Weiner’s mission of art for all is all about improving Houstonians’ quality of life through art.

These amazing women spoke to us about how their arts education work with children teaches bravery, adaptability, and improvisation. They believe in educating mindful citizens, and their passion and commitment simply radiate out from the bottoms of their hearts and dancing soles. They also run a teaching artist education program that provides Houston artists the tools for career longevity and sustainable models for living their art, advocating for arts education, and mindful community action. Oh, and these two women are dear friends. Texas is not messing around with that state motto.

One more week to go! On the ground in St. Louis, MO, and thrilled to meet members of Interfaith Partnership of Greater St. Louis today! 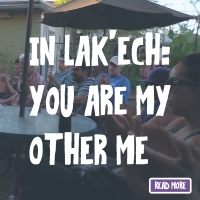 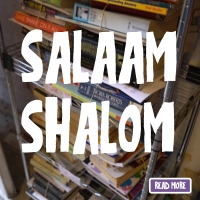 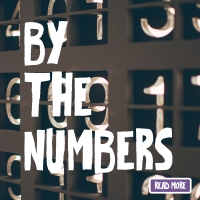